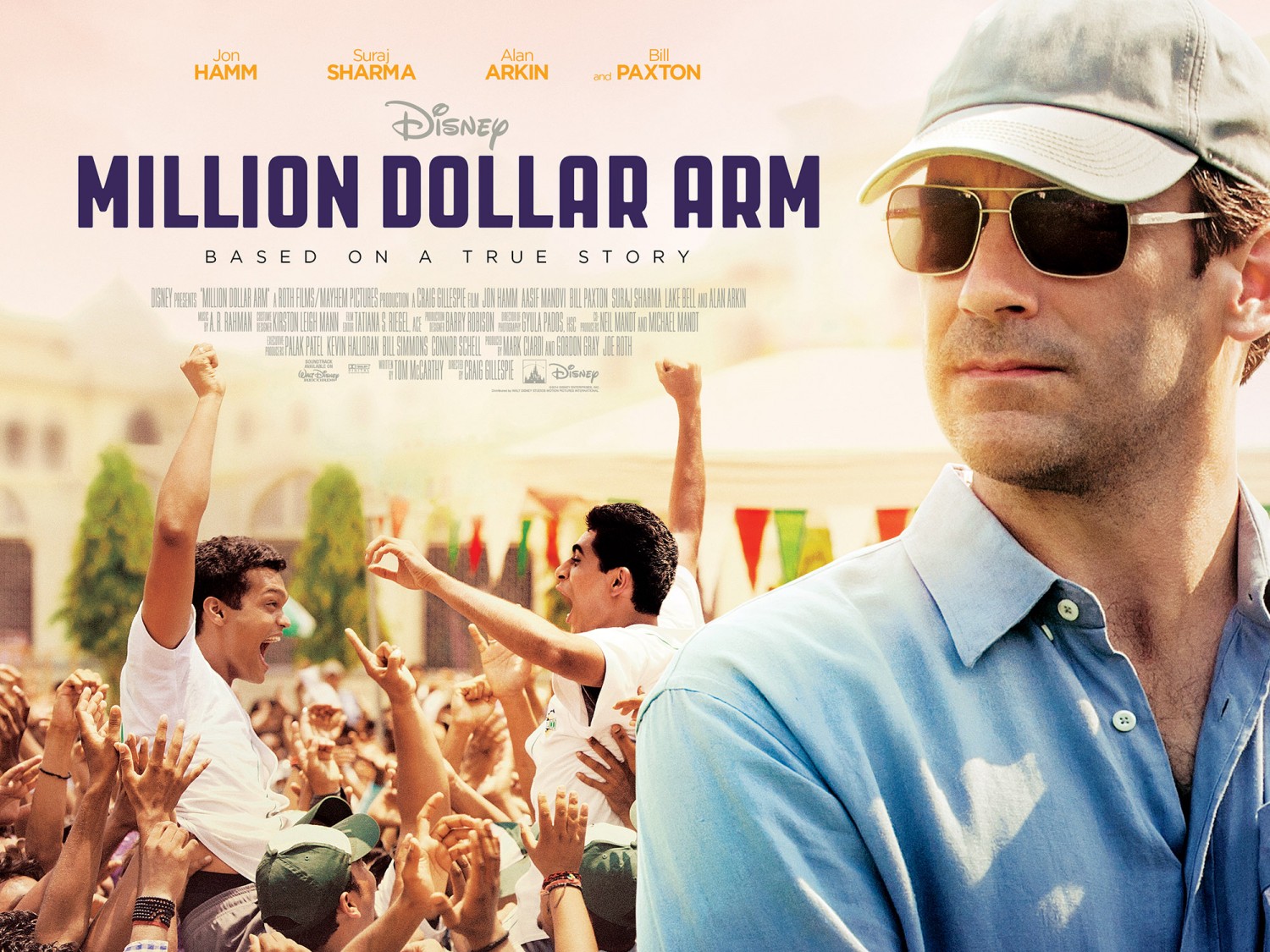 I’ve seen this film twice now and would gladly watch it again with someone who hasn’t seen it. How can this be? It’s not a made for _______(name the celebrity or the character) out of the gates sure-to-be an award winner blockbuster. The Million Dollar Arm came out earlier this year juxtaposed on the marquee with Godzilla, X-men, and Robert Duvall (A Night in Old Mexico). I don’t know if it received much fanfare. The previews were enticing, but not enough for us, a family of five, to drop 60 bucks (that’s just matinee and snack bar!).

So, time passes, and we queue up Million Dollar Arm on our home screen. Ah, Disney. That’s nice. Based on a true story. Hmmm. OK. After the establishing shot bobs past the bobble heads, we see JB Bernstein (“Mad Men’s” Jon Hamm) verbally pitching. We soon find he’s failing as a maverick sports agent and out of desperation, he concocts a make or break contest to bring two rookie lads from India and train them up to pitch professional baseball. So off we go. We get India, we get the nuances of the culture, and the inevitable conflicts. We also get a lot of heart.

The two young men who win the contest are whisked from their remote villages and quickly immersed in metro L.A. As in India, hilarious missed understandings abound while JB bulls toward his goal to have his boys ready for a pro team tryout. A savvy romantic interest orbits into JB’s world in the form of Brenda (marvelous Lake Belle), the girl next door. JB’s partner and friend “Ash” (Aasif Mandvi) offers substance as a “family man” as well as comic relief. The story keys in on how JB will redeem himself, or does JB stand for “Just Business”? The USC Pitching coach, deftly portrayed by Bill Paxton, is the odds-maker who rips JB’s agenda with reality checks.

The Indian players (Siraj Sharma and Madhur Mittal), easily win our hopes and dreams just as they do for their people back home in India. Then there’s the surprising and intriguing linchpin Amit (Pitobash Tripathy), a diminutive and enigmatic powerhouse of enthusiasm who appears out of nowhere to act as translator and assistant coach.

This film connects us in such a way that we all become fans of Riku and Dinesh. It is a genuine “feel good” PG film, easy on the histrionics (no one dies or goes too berserk), laced with great characters like Alan Arkin’s sport scout, and emblematic of how we humans can roll with innovation, determination, and heart. And, we know that this is so because the “story” of The Million Dollar Arm is a true story!