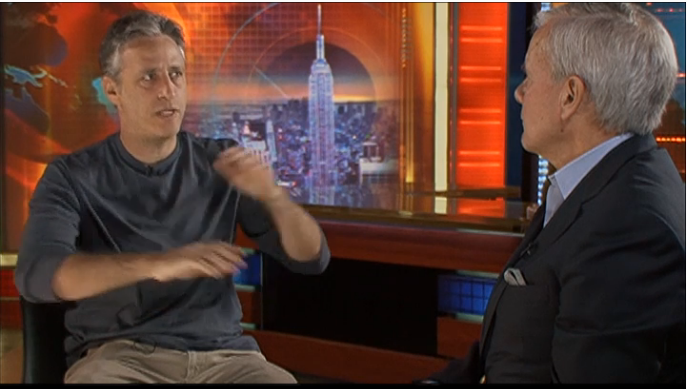 “The best thing that came out of it [60’s] for me was an interest in society.”  Jon Stewart

“I am a product of the 60’s… in the sense that it was a fear decade”, Baby boomer, Jon Stewart explains to Tom Brokaw in this interesting 4 minute video interview from The History Channel.

Jon is speaking primarily to the perils within our own country relative to societal freedom, such as the First Amendment, Freedom of Speech. Stewart references Lenny Bruce, a rebel ‘beyond boomer’ (1925-1966), who pushed this in his comedy, and paid dearly for it.

“Back then [in the 60’s], there was much more of a shared consciousness than now.”  Jon Stewart

Stewart cites luminary personalities of that decade such as Robert Kennedy, Martin Luther King Jr., and Neil Armstrong as examples of people that “appeared to inspire and to really make a difference”.

“I think that this country is more resilient and less fragile [than some] believe it to be.”  Jon Stewart

Thank you Jon Stewart, for making us laugh…for being a successful boomer unafraid to be who you are, for caring enough to share candidly, and brave enough to poke fun at our human foibles and idiosyncrasies, including your own, even when it may not be popular.

2 thoughts on “‘Boomer’ Jon Stewart with ‘Beyond’ Tom Brokaw”